Behind the Mask, directed by Dr Trotman and filmed by Clive Copeman, features  reflections and stories of over 100 global healthcare workers Dr Trotman has interviewed via Zoom since March 2020.

“I think many healthcare workers and people involved in our pandemic response feel like their approach has been criticised and questioned, and the takeaway from this film is that they made the right decisions,” Dr Trotman says.

Dr Trotman says the raw, personal anecdotes featured in the film were captured from a range of medical and healthcare professionals, from ER nurses in the USA to medics in Italy. These stories track the pandemic from its outset, when huge personal sacrifices were being made to help care for the sick and dying.

“What comes through overwhelmingly is that New Zealanders got off lightly as a result of our decision to keep COVID out until we had a vaccine, and when I explained to my interviewees that many New Zealanders were questioning whether the lockdowns and mandates were warranted, these workers would respond by saying ‘well they haven’t seen what I have seen.’”

Dunedin-based Dr Trotman,, has been unable to work himself during the pandemic for medical reasons.

He says his personal motivation for producing the documentary was to ensure that the massive efforts of his colleagues at home and abroad were recognised.

“I realised very early on during the pandemic that many would forget or underestimate the sacrifices made by medical professionals and healthcare workers and I thought that if I couldn’t help by treating patients, I could help by making sure their stories and efforts were documented and shared.”

“It’s easy to forget or decide not to remember how bad it was  in places like New York, Italy and Spain, but that was real – it really happened and some healthcare workers made the ultimate sacrifice and lost their lives.

“I think it’s so important that New Zealanders don’t forget, because we were spared that suffering due to our collective response and we should be incredibly grateful for that.”

Dr Trotman says he would encourage people to watch this documentary because it will help them process and reflect on the pandemic response and its impact.

“This film isn’t what you might expect – it’s not a film about medicine, but rather a film about people’s individual experiences and the difficult emotional challenges they faced on the front-line of the pandemic response.”

You can watch ‘Behind the Mask’ on Vimeo.

For more information go to - www.prnfilms.co.nz 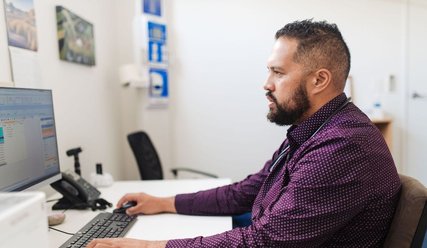 Applying for research funding through the College

Telehealth around the motu | Gore

Telehealth around the motu | Dunedin